Back to school! The first time I have ever been relatively enthusiastic about those words in my life. I really didn't want to let the school down, so I put on my best non-ill face and started teaching. I was very glad to have made that decision after the interview/ interrogation conducted by Hauptschule 10 Class, which included such usual questions as "What's your favourite colour", "Have you seen the Queen" and "Do you know Jamie Oliver". Then, a student put his hand up (again) and I assumed, as he was the best english speaker, that it would be yet another understandable, sensible question. What he actually asked in the most matter-of-fact voice I have ever heard was the lovely mid-morning thought provoker "Do you believe in God?" I did the sensible thing of skirting around the question and promoting tolerance. And also spoke really quickly so they didn't understand most of what I was saying. Normality was resumed (so to speak) when the next student asked, in the style of an observational comedian, "So, what about this economic crisis?" It felt like a slightly stilted version of Mock the Week.

The impromptu theological discussion woke me up somewhat, so I had enough energy to meet Rachel again at another cafe. I promise that one day I'll make a list of all the nice cafes and write them down in one big journalistic whimsical mental jaunt through Oldenburg. Unfortunately, today is not that day. Today I speak to you about the horror that is Chai Power. 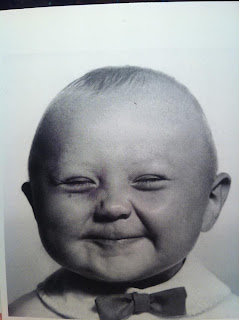 I tried for a long time to find a picture to adequately describe Chai Power. Instead, I am showing you a picture of a cheerful baby, as protection for you and therapy for me.

Chai Power jokingly describes itself as tea. I should have seen the danger signs. The suspiciously low price. The warning the waitress gave ("You know it's bio, right?") as a look of sheer terror slowly enveloped her caring face. The colour of the thing. But no, the British Council told us to say YES to everything, so why not try this?

Because it is terrible.

I can only equate the sensation of drinking Chai Power to that of trying to chew through a foot of freshly laid tarmac whilst being bombarded with dust from a vacuum cleaner that hasn't been emptied for five years. For this reason, if you ever hear me describe something as Chai Power, you now know my opinion on said thing. Still, two euros isn't bad.

Having recovered from the Chai Power Experience, I was really happy to see Rosie and show her the new sights of Oldenburg that I had discovered. I therefore immediately took her to the Baldini Grand Cafe, and was not disappointed with her reaction. By coincidence, we met Rachel there again, and Rosie and I tried the Flammkuchen, which was as delicious as the surroundings.

Here is an actual real-life picture of the upper floor: 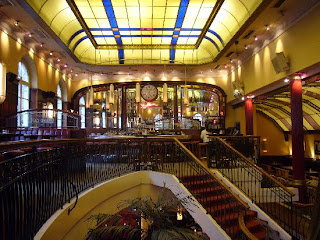 Don't say I never treat you

A quick weekend trip to Hannover followed, during which I met Rosie's new flatmates. Lovely people, and a warm, comfortable new flat to live in. We were treated to Kohlroulade, which was succulent minced meat wrapped in cabbage and lathered in a creamy curried sauce. I loved it so much, I asked for seconds, and with what was intended as a compliment, compared it to haggis. Unfortunately, not everyone has actually tried haggis, so they believed I was calling their meal Chai Power. I was certainly not. We all drank beers. Rosie nursed/ took on the role as full-time carer to her non-alcoholic one for three hours.

Went to the Hannover Oktoberfest with Rosie, Dan, Millie and Kat. Was a bit commercial, but they still had the large beers, so I was content, and by that I don't mean drunk. 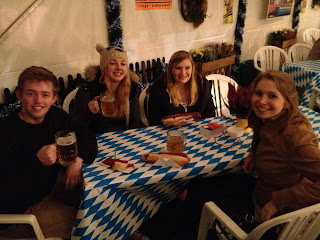 Dan is the silent hero taking the picture 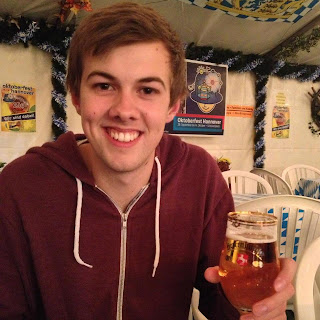 This is Dan! Prost!

Dan, Millie and I went down a slide on some carpet for a couple of euros, which was nice.

All in all, an enjoyable (if a little sickly) week. I also realised earlier today that it has been a month since I left the balmy isles of Britain to go on this journey. I have to admit the time has passed by pretty rapidly. Still, 8/9 of my time here left to go! Off to school tomorrow and then going out to a club called Polyester Oldenburg for its Jazz night. Should be interesting, and I still have some faith left in the "always say yes" mantra. I will, of course, keep you updated. Bye for now!