Oldenburg: a gem in the marsh

It's been a monumentally long time since I wrote anything for this blog, but I didn't feel it suitable, as I've been back in old Blighty for many months. However, I found this the other day, and realised I had never actually posted it. If I had, then I may have written more for this blog. Oh, how the present is defined by the past! Anyway, here is a little article on the town I called home for 10 months...

I've been working out how long I have until I am ripped away from this enjoyable teutonic limbo, and it comes out at approximately 5 weeks. This is scary in the sense that I am becoming trapped in my self-reflections on time and mortality. Or in other words, time has gone really fast, hasn't it?

Having lived abroad in the same place for 8 months now, I believe I am sufficiently qualified to both describe and analyse the place I have called home for a substantial time. This place, as you will have guessed from the title, is a small town called Oldenburg, west of Bremen on the Great German Plain.

Never a very important town, due to the proximity of Bremen and various plague epidemics and fires through the years, Oldenburg nevertheless has a distinct air of the royal. At one point home to the Kings of Denmark, the town retains the neoclassicist elements laid down in the late 18th Century. This is most obvious when walking into the Innenstadt from the south, as before you looms the impressive bright yellow facade of Oldenburg Castle. The Castle today houses the county museum for art and art history, along with a chronicle of the history of Oldenburg trailed through plush deep red, oak and gold rooms. Well worth a visit, if not for the history of Oldenburg but for the various interesting art installations held, the prices range from free for children under six, to €5 for a full paying adult. 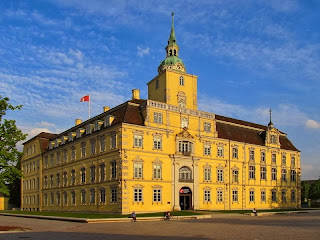 I am a handsome castle.

Just south from the Castle, crossing the ringroad that connects all the major ports o
f call in Oldenburg, you reach the Schlossgarten, a public park looked after by the local Carl von Ossietzky University. The spacious gardens offer pretty vistas and a wide array of plant-life, including a sizeable botanical garden, open 11-4 on weekdays at no cost. The University specialises in inter-disciplinary subjects, and is named after the German recipient of the 1935 Nobel peace prize, murdered by the nazi regime for bravely uncovering german re-armament on the eve of the Second World War.

Walking back towards the centre, you pass a statue of Peter Friedrich Ludwig, the first Duke of Oldenburg, and a few metres on, the largest church in Oldenburg, the Lambertikirche. The church was built using the small bricks so typical of Northern Germany, but has a drastically refurbished interior, with clean, white angles creating a calm, open space. A large prism cross also hangs over the congregation, beautiful in the sunlight. Open Monday to Sunday, 11-6, the church satisfies all tastes. 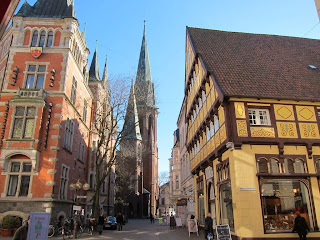 After the peaceful, spiritual interior of the church, you can satisfy your material needs by crossing the market place to reach the Schlosshöfe, a large shopping mall deposited in the centre of Oldenburg. The mall caters to everyone, with designer shops, restaurants, a pharmacy and a supermarket, and is open Monday to Saturday, 8am - 9pm.

After your shopping spree, take time to meander through the surprisingly bustling streets in the centre of town. The pretty buildings complement the narrow streets well, and there are even more designer shops, along with traditional brands and many different eateries in all shapes and sizes. The Kunstcafe in the west of the town centre has a relaxed, welcoming atmosphere with reasonable drinks prices and a superb crepe menu. If you are wanting to keep on your feet, there are plenty of quick snack bars dotted along the main streets offering most things, from pasta to the traditional Currywurst, a German sausage with ketchup and curry sauce. 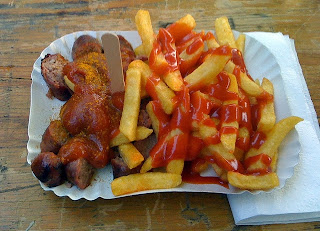 If you ever say anything against this meal, I will fight you.

Walking eastwards along the aptly named Langen Straße, you eventually reach the opposite end of the town centre, a quarter called Lappan. This is Oldenburg's main meeting point for the locals, and the building from which the area takes its name is a large bell tower, first built in 1468, that stood as one of the five town gates. Rather disappointingly, today it only houses a travel centre and cash machine. At Lappan is Wallstraße, a street full of eateries and bars. Restaurant New York New York serves beautiful American-Italian food in hearty and very good value portions, and the walls inside are adorned with thousands of photos of American film stars, singers and general celebrities along with tasteful stained glass depicting various symbols of american life.

Life in Oldenburg continues well into the night. Oldenburgers generally begin a night out along Wallstraße, so a two minute walk along the street will find you outside Fiddlers Green, a traditional Irish pub serving everything an Irish or British ex-pat could wish for. There are different drinks deals every night, and a pub quiz runs on Wednesdays. Accompany your quiz with their famous bacon sandwich, reasonably priced and guaranteed to keep you full for the night (and probably a large majority of the next day). There are various bars and clubs on the same street, but look further afield for quality. For example, Loft, directly in the centre (Baumgartenstrasse 2) plays modern alternative music in a relaxed and cheerful atmosphere, and if you're looking for something with a bit more bite, Amadeus (Mottenstrasse 21) has regular rock nights and heavy metal gigs.

For a quieter activity this side of the town centre, head to the connected Horst Janssen Museum and Stadtmuseum, the first of which is dedicated to the eponymous multitalented artist who lived in Oldenburg in his youth. Both museums are full of a mixture of contemporary and classical art through different media, and prices are minimal (5 Euros for entry to both). 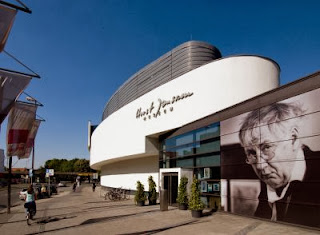 Can you spot Horst?

Oldenburg is famous for horse-breeding, with the Oldenburger horse well-coveted by many, and a statue has been erected in Lappan as a tribute to this famous animal. There are other horses dotted around the town, along with two bronze elephants guarding a passageway on Langestrasse. Of course, to see real animals you need only take a bus for ten minutes out to the beautiful surrounding Ostfriesland countryside (regular buses from the Main Station and Lappan), but a long weekend exploring Oldenburg itself makes you realise the sheer diversity and intricacies that many are yet to discover in Germany. 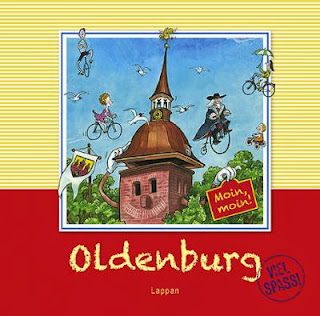 So that's it! Hope it was, if not enjoyable, then slightly interesting. I'd like to call it educational entertainment, or edutainment if you will. If you like it, share it with your friends and maybe come for a visit! It's seriously great. Oldenburg I mean, not my blog post. I would never be that vain.
Posted by David Taylor at 14:42